Paroxysmal nocturnal hemoglobinuria and its complications 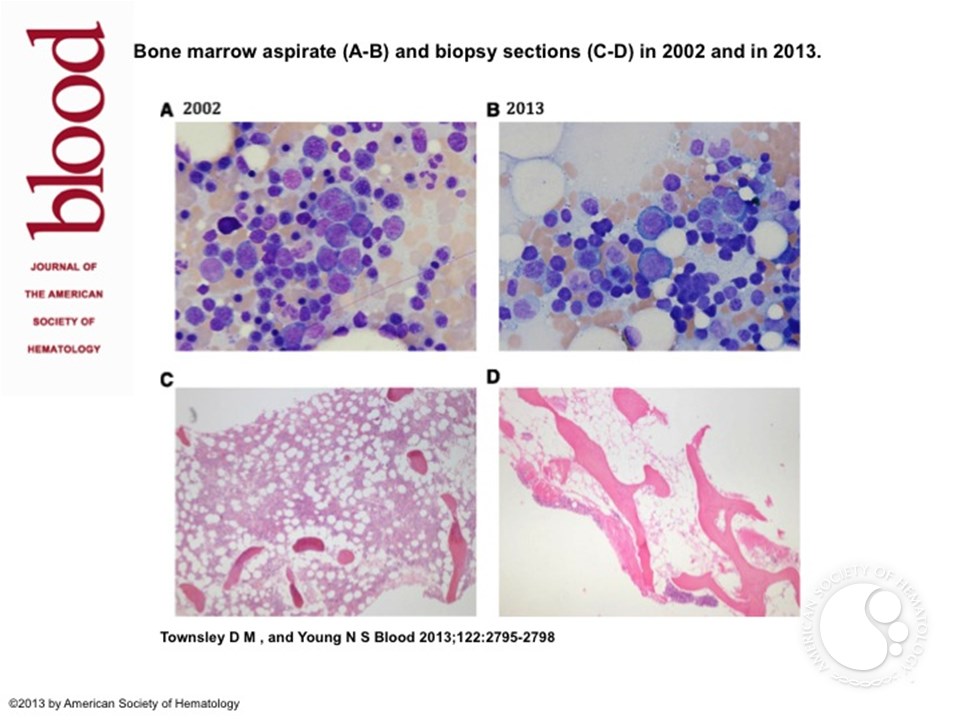 #00022440
Author: Danielle M. Townsley and Neal S. Young
Category: Bone marrow failure > Acquired Bone marrow failure > Paroxysmal Nocturnal Hemoglobinuria
Published Date: 10/17/2013
A 24-year-old medical editor presented to her primary care physician with fevers, epigastric pain, nausea, and vomiting upon returning from a business trip in Brazil in 2001. Symptoms resolved, but a few weeks later, she developed episodic but persistent severe central epigastric pain, accompanied by nausea and vomiting but without fever. Gastroenterological evaluation that included 2 esophagogastroduodenoscopies, a computerized tomography scan of the abdomen and pelvis, and routine testing for infectious etiologies was unrevealing. In 2002, pallor on physical examination prompted evaluation for anemia: hemoglobin was 7 g/dL, and her remaining blood counts were normal. Hemolytic indices demonstrated a markedly elevated lactic dehydrogenase (LDH) of 3998 U/L and undetectable haptoglobin in the presence of a negative direct antiglobulin test. A sugar water test was negative, but the Ham’s test was positive. The patient was treated with prednisone, 50 mg daily, and referred to our institution for confirmation of the diagnosis. On further questioning, she reported occasional episodes of dark urine in the morning. The white blood cell count was 14?000/mm3, the neutrophil count was 11?000/mm3, hemoglobin was 8.7 g/dL, mean corpuscular volume was 112 fL, the absolute reticulocyte count was 374?000/mm3 (corresponding to 15% reticulocytes), and the platelet count was 255?000/mm3. Flow cytometry revealed that 51% of erythrocytes and 92% of granulocytes were glycosylphosphatidylinositol (GPI) negative. Total bilirubin was 2.4 mg/dL, and direct bilirubin was 0.6 mg/dL. Serum iron was 42 µg/dL with 13% saturation, and ferritin was 10 mcg/L. The bone marrow biopsy (Figure 1) is shown. Cytogenetics were normal. Figure 1 Bone marrow aspirate (A-B) and biopsy sections (C-D) in 2002 and in 2013. (A,C) Bone marrow in 2002 showing erythroid hyperplasia (myeloid to erythroid ratio 1:2), increased numbers of erythroblasts, 50% to 60% cellularity on core biopsy, and absent stainable iron. (B,D) Bone marrow in 2013 showing decreased myeloid precursors with erythroid hyperplasia, marked hypocellularity (10%), reduced megakaryocytes, and iron stain markedly increased. Over the next 3 years, she was maintained on an alternating daily regimen of 15 to 30 mg of prednisone with relief of her gastrointestinal discomfort. Hemoglobin remained 7 to 8 g/dL without transfusion; the LDH was much elevated, consistent with persistent hemolysis. She was instructed to avoid prothrombotic medications, such as oral contraceptives, and counseled to avoid pregnancy. However, in 2004, she proceeded with an unintended pregnancy, during which she suffered multiple, catastrophic complications. Hemoglobin fell to 4 to 6 g/dL with an associated rise in LDH, and she required packed red blood cell transfusions bimonthly. Thrombocytopenia appeared and worsened throughout the pregnancy to a nadir of 22?000/mm3. The pregnancy was further complicated by recurrent pyelonephritis with perinephric abscess requiring percutaneous drainage. Despite prompt introduction of prophylaxis for thrombosis with enoxaparin (1 mg/kg subcutaneously every 12 hours), she suffered a nonocclusive portal vein thrombosis, which was identified incidentally during a renal ultrasound. At 28 weeks gestation, she underwent a Cesarean section for preeclampsia, after which she was transitioned to Coumadin. In 2005, she was entered into the SHEPHERD trial (Safety in Hemolytic PNH Patients Treated With Eculizumab: A Multi-Center Open-Label Research Design)1 and received eculizumab in dose escalation and subsequently maintained at 900 mg intravenously every 2 weeks. Transfusion requirements for packed red blood cells decreased, and the LDH normalized. In 2007, she continued to require occasional packed red blood cell transfusions to maintain hemoglobin above 7 g/dL. Prednisone was resumed in addition to eculizumab, and she was able to achieve transfusion independence. However, in 2012, she developed gradual worsening cytopenias, and by 2013, white blood cells were 2100/mm3, neutrophil count was 380/mm3, hemoglobin was 3.7 g/dL, reticulocyte count was 12?000/mm3, and platelets were 5000/mm3. Iron studies demonstrated elevated iron saturation and ferritin of 4329 mcg/L, consistent with secondary hemochromatosis. Bone marrow biopsy (Figure 1) and flow cytometry (Figure 2) are shown. She was urged to proceed with a matched unrelated bone marrow transplantation as she lacked an HLA-matched sibling donor. However, the patient deferred transplant because of fear of its complications, as well as her ability to maintain normal life activities despite her disease. She opted for a round of immunosuppressive therapy. Horse antithymocyte globulin, cyclosporine, and eltrombopag were administered as part of a clinical trial at our institution. (This trial was registered at www.clinicaltrials.gov as #NCT01623167.) Five weeks later, her counts had improved to white blood cells of 2850/mm3, neutrophils 1550/mm3, hemoglobin 7.4 g/dL, reticulocytes 124?600/mm3, and platelets 38?000/mm3 (untransfused). 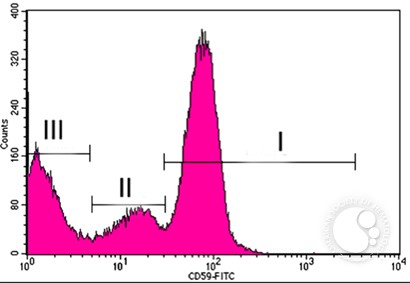 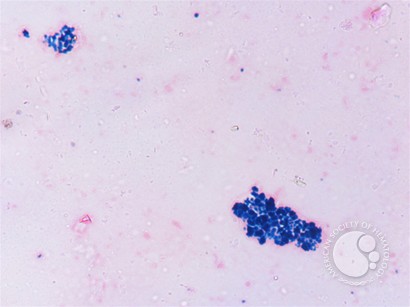 Perl’s stained-urine of an adult male who is a known case of PNH since over 10 years - 1. 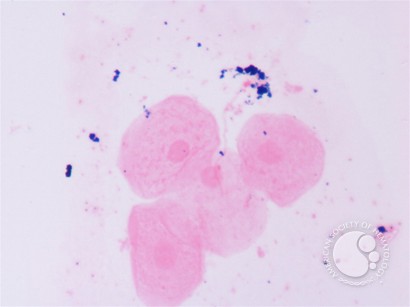 Perl’s stained-urine of an adult male who is a known case of PNH since over 10 years - 2. 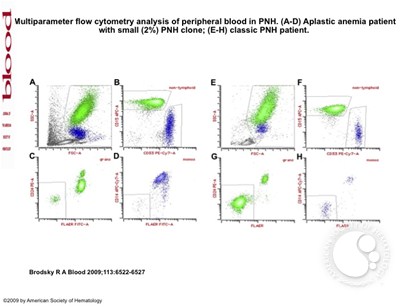